Last update- wow, been to Burma since then and a lot of time at home.

Woodside got me to Burma (Myanmar) in late 2015, first off shore gas discovery made, without me at the time- dang, too early, back in WA had one last dual well job, then recession in February 2016- nothing on the books until 2018. Burnt a lot of money and upended the super fund so me and the twins could get through to 2018, them with end of school to go to uni, and there was no jobs in town or at the supermarkets even! Mid 2017 was a bad time, $ wise, but there was help to gert me through. Looking back, still wondering with no call back what went on over West- new work was coming up, but maybe- I am not a Perthite.

Real Energy Corp needed a wellsite geologist, and it was handballed to me from Doug Short- no problems and thankyou, he did the composite logs, at 78 he is still a wonder- 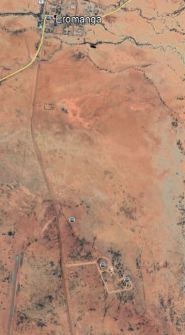 There was still no work, back on the dole with a small pocketmoney shelled out from the self owned company- no more profits.

An offer came up from Doug to again do a dual wellsite geo job in the Galilee basin, which was next door- practically – literally – to the proposed Adani coal mine tenement, for Comet Ridge Ltd, two wells- an appraisal and a re-entry 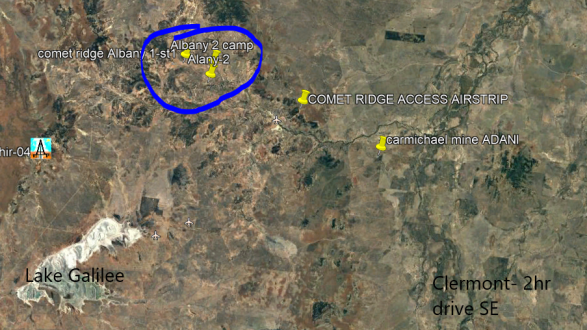 Another feather to my cap was that I had done a well to the WSW in 2014 nearby, Ophir-4.

That was early in the year. Rain dropped- 20″ apparently- in the area, delaying the drilling rig setup for nearly three months, so an April start ended up late July, and I was out there by mid August until September- nice, and got to work with Doug once more for a few weeks. He had an Apple laptop. I had a win10 laptop. Overall the coring and drilling got there with a good hint of success- I am not privy to down the line ino- but- I have my fingers crossed for them. As I left him at TD to do the wireline work, there was a little sorting out of files from the backup drive to do. Another story could be told of the job, just not here, and there will be more work to do in that field.

This time have a contract for two wells through Reservoir Dogs, Perth, for Woodside, OFFSHORE! Meant having to redo HUET course again {helicopter underwater escape training} and a few other health and Safety bits and pieces- all tools for more jobs is the way to look at it! Although another medical check, ah well. Offshore has not changed, and a good chance to catch up with old colleagues Steve, Paul and Marshall, and maybe with Nigel, Mandi and Andrew too on the way back out to Vic from Perth. The logging unit has mwd and dd in it as well- crowded- a little. At least there is two geos out for this job- Bill F and Mitch are the offsiders this time

Statoil contract in Northern Territory, five wells, Griff Weste as OpsGeo, compadre on site was Mike Cane. The work was either from Spud to TD or just for the continuously cored section, wireline retrieved core job. The break from Feb-Apr was nice, the work was good, intense and a welcoming time to upgrade and de-rust work skills. Day rate was higher again, ut looking on the workload- yeah, not bad at all. I would like to see evaluation of the Southern Georgina Basin continue next year- still awaiting the well tests on the favourable wellbores.

QERL, Ophir-4, also through AWT, with a weeks notice! Another coal seam gas job, this one with continuous retrieved core through zones of interest. Weather was bad at end of well, sleeping at the rig rather than the camp 23km away was trial during wireline logging! Trip home was good, via woopy from Lake Gallilee to BrisVegas, caught up with Mandi Ryan, stayed with the Smoko Kid at the Gold Coast a coupla nights too. Day rate same as last well, also no complaints from clients- Graham Pope was the opsGeo- nice guy.

Strike Energy, southern Cooper Basin, Coal Seam Gas exploration, well was not far from the Strezlecki Creek and Strezlecki Track crossing. First time on a Schramm rig, accommadation was good, the well went well, the wireline was a little short, but Klebb-1 was a nice surprise to get on, through AWT, and day rate much better, no complaints from client- that was nice.

Tellus PNC joint venture well in northern central Cooper Basin with Doug Short. Looking for hydrocarbons in the Birkhead. Longer than expected.Better day rate this time for a 12 hour shift.

Ah, the smell of the sump, roaring diesels, the Crows, the dust, the pit…

Wellsite Geologist and assistant to the Operations Geologist at Lakes Oil NL at Morwell, Gippsland on a stratigraphic hole, including HQ coring through the Strzelecki Group and into the main objective of the well, the underlying Tyers Subgroup (media released quarterly report May 7 2013)

Finally finish reached target depth unfortunately for me, so now looking for the next project- may have one in the desert with another old mate, fingers crossed! Do not really wanna drive around town with groceries again. Enjoying the southern hemisphere winter- not- would like to go speedsailing while waiting!

, recruitment guy Dave got me onto Lakes Oil PL over summer- a top hole supervising and maybe continuous coring next. Better than spending summer in the desert, but the drilling crew do not work over Xmas. So back to deliveries for a fortnight, then real work. BTW, the government has let my pension as a single dad go up in smoke, and now I am on income support at a lower rate with no medical support either or discounts for utilities (wow 5%)- so If I Cannot Work, I am buggered… Sell the house, move on out- on top of increasing utilities and property taxes too. I some times look at that oncoming truck’s radiator on the highway, will it be quick?… then think of his family…

Thanks to my sister-in-law who looks out for now and then, I am now on a consulting ticket for a company temporarily as of late September  for a few weeks[?] of October, locally, in the Latrobe Valley, as a Wellsite working on a coal coring job up valley from home, with an option if successfully completing this task for another in West Australia monitoring a geothermal exploration well. And then some more down in south Gippsland next year too. RESULT- 6 days worth paid out a laptop and MSOffice- just need a log program.

Should start to pay out for kids dental- a new front tooth for #2Son and braces for the twins, and Then The Roof…

Graduated Applied Science (Geology) 1983, started in Oil and Gas which meant logging and sitting petroleum bore holes to identify productive zones via hand specimens or microscopy or fluoroscopy or chromatography or interpreting drilling parameters or from logs of gamma-rays, density, neutron and sonic via wireline or LWD- and passing on recommendations or reports as needed as a geologist, analyst, and then as directional well surveyor, MWD and as a drilling tool operator on directional wells. Final position was LWD engineer before leaving the field due to family reasons. This is a list to all the wells I have ever been on up to about 1999… Locations were around Australia and overseas in different areas of Oil and Gas Exploration. Picture below is the Maersk Valiant 1985, when I was a mudlogger. I appreciate your taking the time to review my resume. If you feel that your company is in need of someone with my background, I would enjoy talking about any opportunities, around Gippsland anyway. Please contact me at your earliest convenience so that we may discuss the possibilities in detail.

This is my CV